Here is what I started with, notice the area in the wings where the spoilers will be installed.

I really wanted a SuperHawk with spoilers. My only "frustration" (ha, ha, ha!) with the stock SuperHawk is that is wants to glide forever! ;-) I simply have a hard time landing it in small areas. I also wanted something that would allow me to be competitive in RES competition. (Rudder/Elevator/Spoiler-only for thermal duration and spot landing). This would be a great nostalgia looking plane that might be capable of doing well in competition... it should turn heads!

The plane is identical to the regular SuperHawk except for the wings. I again chose the SD-7037 airfoil for these. The wings were beefed up with a spar system that extends just past the spoiler section and there is a upper and lower carbon fiber "sandwich"area at the root. This adds some weight but also a lot of stiffness. I wanted to be able to winch launch this baby!

My very first opportunity to try these out was at the Poway RES competition in San Diego... on a winch launch! I was very pleased to say the least, I only wish I had more practice time so I could have done better at the spot landing points. I was also amazed at the stiffness of these wings (with spar system) compared to the stock ones, again very nice!

Since then I have flown several times and I can tell you that I will probably hardly ever use my stock wings now... I've been "spoiled"!!! I now fly with much more confidence... I used to cringe when landing my SuperHawk (or stock Hobie for that matter) because of fear of over/under shooting the landings. Where I normally fly that would spell CRUNCH! Now I can truly really relax when I fly, before I was always concerned about my landings... well, no more! 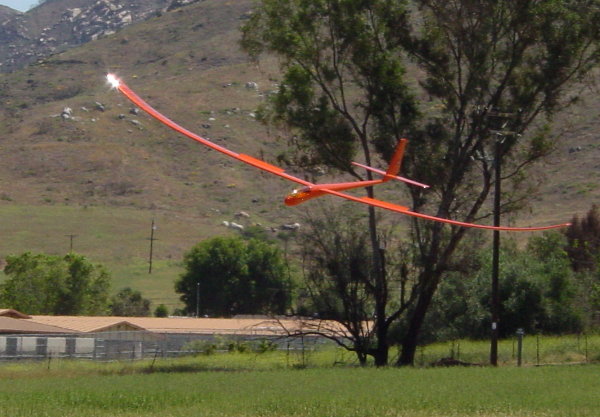 Here is an approach to the spot landing tape at Poway... spoilers are variable and set up on the throttle/spoiler stick

Talk about turning heads! The SuperHawk certainly does that... which definitely adds to the fun!