NEW IN THE BOX! SOLD! 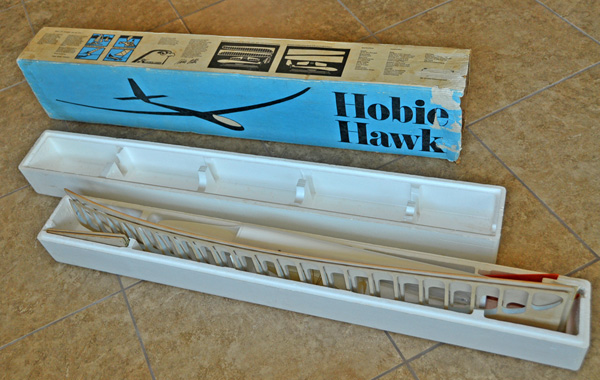 This is a new in the box, original Hobie Hawk. A real beauty.

Wings: Uncovered with wing tips and roots factory installed. Some light sanding may be required.

Tail Feathers: Rudder has been covered with trans-orange covering... this looks to be as much as they did on the kit and stopped. Elevators uncovered, roots and tips factory installed. Some light sanding may be required.

This is one of my collectable planes I have decided to part with :-(

If you have ANY questions or would like additional information or wish to purchase this Hawk please email me.


This is an EXCELLENT Hawk I got from my friend Tony - maker of the SuperHawk: 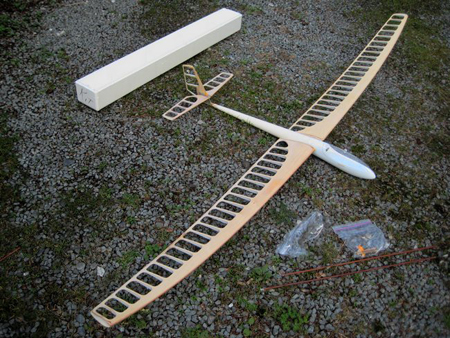 Tony's description: Selling one of my last Hawks in my collection. This is a restoration project that only needs filling, paint and covering. I don't have time to mess with it so if you want a kit plane you can choose your paint scheme and covering.  The plane is "naked" so you can see all the substructure in the pictures and you know what your getting. New in box versions of this plane sell for $600. This will make an excellent flyer.

The fuselage is totally rebuilt. New dorsal, new  uncut nose pod from Ross models (try and find one of those nowadays...), new canopy from CAB (RIT dye-able, as the originals) Pushrods are original Hobie pushrods**, they should be replaced as the original hot glue inside is too old.

Tail has had the old trans orange covering stripped off. Traces of the adhesive may remain in some spots but very minimal - see pix. Covering was scraped off, not sanded to keep the integrity of the micro plywood skins.

Wings are in very good condition. They were Trans orange and were stripped off like the tail peices. No structural damage on the major portion of the wing. The only repair is to the right wing trailing edge and one outboard rib. Micro CF strips have been placed between plywood layers to repair a couple stress cracks and are stronger than the original plywood. No weird wifferdills in the trailing edge, its straight. See pix. One far outboard rib was cracked and neatly glued. Should not be visible when covered.

Included will be a brand new set of wing rods, an EXTRA dye-able NEW canopy, brass sleeves for the wing rods (previous owner did not glue them in - go figure...).I'll also throw in 2 sets of tail stickers with the Hobie Hawk logo on CNC cut vinyl. The original foam box is included (both top and bottom) and will be wrapped in cardboard for shipment. Manual is downloadable from Hobiehawk.com.

If I did not already have too many Hawks I'd be holding onto this one... don't let this one pass you by, great plane at a great price!

This is a new in the box, original Hobie Hawk. A beauty for sure!

Wings: Basically perfect. This is a Factory pre-covered ARF kit. It has been sitting for 25+ years so there are a few areas with a minor wrinkle or loose covering, but if you have a heat gun and iron these wings will come back to life easily. You will need to check the washout anyway. One note about the wing incidence pin. Somewhat often you need to correct the wing incidence between the two wings, Hobie's solution was to re-drill the wing and re-set the wing tube - a huge pain. Rather than re-drill the wing I choose to instead "tweak" the incidence pin with a slight "s" bend. That is the case with this hawk. There is a better explanation of what I do HERE.

Fuse: Uncut, as new, however like just about every Hawk out there of this vintage it has crazing in the paint at the mid-fuse joint - Crazing are little cracks that form due to the flexing of the plastic nose pod under the paint. There is a faint craze line at the dorsal seam as well. This is very typical. The only planes that escaped this were the ones stored inside a house that was air conditioned and heated. Includes original factory orange tinted canopy (note: There are some tape adhesive marks on the canopy that need to be scrubbed off).

Tail Feathers: As like the wings, basically perfect with a possible wrinkle or loose spot in the covering.

Custom, one of a kind Hobie Hawk kit with RG-15 airfoil.

That's right, this is a one of a kind Hobie Hawk. The wings were custom built by my friend Tony, the builder of the SuperHawk.

Wings: One of a kind custom RG-15 airfoil with same ply over blue foam construction as originals, but with carbon fiber laminate in the trailing edge - this is the first place a wing would break from a simple stiff weed puncture... no more! These wings take a stout 3/8" CF joiner rod (included). The craftsmanship is incredible, BETTER than original Hobies... check out the CLEAN routed rib bays - sweet! These wings are a one of a kind!

Fuse: The good: It is un-flown, nose pod un-cut, I've already bored it for the 3/8" CF joiner rod and it's structurally perfect. The weird: I have no idea what the deal was with this fuse'. It looks like it was used for practice painting. You can see the original primer with what looks like a spray can job over it and it is all flaking off. It will need to be stripped and re-painted... but underneath is a perfect fuselage! Note: The wings and fuse have been re-aligned by me using THIS method.

Elevators: Structurally look perfect, but the white covering has a few puncture patches. Recovered, these would be perfect.

The Box: The styro  box is pretty cool, it has been covered in some great 70's vintage wall paper which has helped protect it on the outside - cool factor+++

Comes with: The plane described above, the box, all rods and pins, the Hobie Hawk manual on CD ROM and a NEW tintable canopy. NOTE: You will need to fabricate a set of push rods - I can sent you dimensions.

Project Hobie Hawk
This Hawk needs a little work, but will be awesome when you are done! 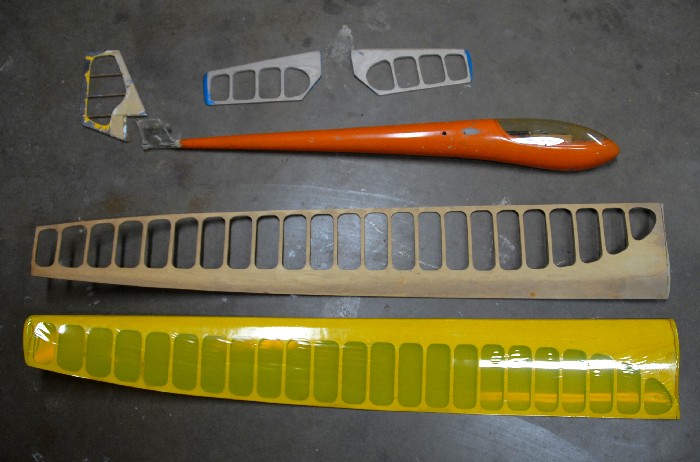 Right Wing: This is an new old stock meaning it is original, never used. It will need the brass insert tubes and wing tip installed (supplied by me) Then, sand and cover. Wing is discolored by age, but structurally excellent.

Fuselage: Structurally excellent. Previous owner installed a new dorsal. New looking original canopy. Original Kraft "brick" still installed. The paint is chipping and because of the dorsal replacement the fuse will need to be stripped and re-painted.

Rudder: This is a built up copy using an original hinge root that is about 10% larger than original. This was one of the best tricks to better handling for the Hobie Hawk. Structurally sound, but needs to be stripped and recovered.

Elevators: Both need to be stripped and recovered. One is structurally excellent, the other has been damaged and needs one of the brass pivot tubes re-aligned, glued back in and re-finished.

Overall this could easily be made into a "9" plane with some work. The biggest assets are the nice wings and sound fuse. The larger rudder, even though not original, is in my opinion a bonus.

I'll include all the pins and rods as well as the Hobie Hawk manual on CD.

This is a Hawk that is 95% restored. The only thing left to do is prime and paint the fuse and install your radio equipment. 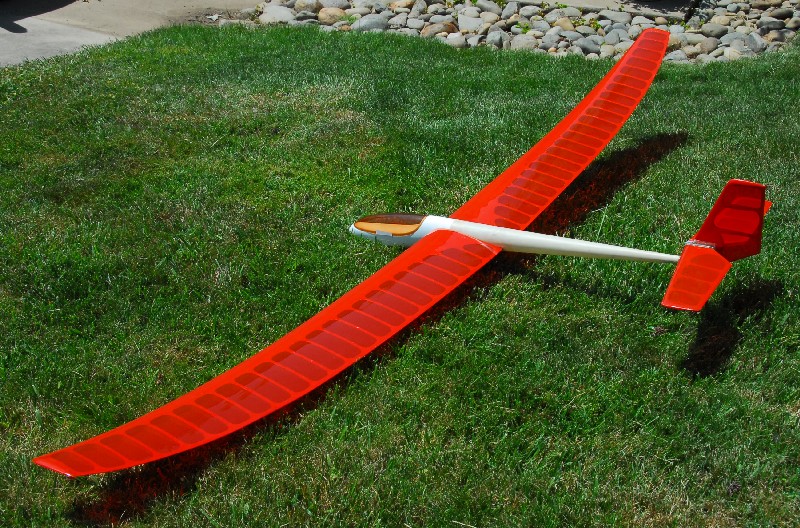 Fuse: This fuse has been completely rebuilt from the ground up. New un-cut nose pod so you can cleanly install modern gear. New dorsal assembly. Two puncture repairs near aft of trailing edge area, expertly repaired with f/g cloth from the inside not a structural issue in the least. Completely stripped bare. Ready for primer and paint. I intentionally did not paint it because some like a white fuse, some like to paint it the same color as the covering. Now you can decide.

Rudder and Stabs: All a "10". Awesome! New trans orange covering.

This is one of the Hawks in my collection I have finally decided to part with. They do not come along very often in this condition, very nice and I always miss a plane of this caliber when I sell one. Build this one for show, or to fly... just don't crash this beauty!

Here is a Hawk that with a little TLC will make a great flyer.

Fuse: Tinted canopy in fair+ condition (needs some clean up). Nose pod has cut-out for old large Kraft Brick. (you will need to make a "deck plate" to install your new servos. Paint fair over all, with the usual crazing of the paint in the pod/mid-fuse joint area with some flaking at the wing rod sleeve area. Dorsal area looks great.

Left Wing: Structurally looks solid. It will need a covering repair or re-covering.

Rudder: Looks like it's been repaired before and the covering is torn so it will need to be checked out. I will include a new rudder rood/hinge just in case you need it.